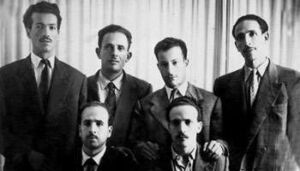 On the night of October 31 to November 1, 1954, the Algerian National Liberation Front issued a statement on the insurgency facing the French occupation. Here is the full text.

ALGERIAN PEOPLE, MILITANTS OF THE NATIONAL CAUSE,

To you who are called to judge us (the first in general, the second in particular), our concern in distributing this proclamation is to enlighten you on the underlying reasons which have prompted us to act by exposing our program to you, the meaning of our action, the validity of our views, the goal of which remains national independence in the North African framework. Our desire, too, is to spare you the confusion that imperialism and its administrative agents and other crooked politicians could entertain.

We consider above all that after decades of struggle, the national movement has reached its phase of realization. Indeed, the goal of a revolutionary movement being to create all the conditions for liberating action, we believe that, in its internal aspects, the people are united behind the slogan of independence and action and, in the external aspects, the climate of detente is favorable for the resolution of the minor problems, of which ours, with especially the diplomatic support of our Arab-Muslim brothers. The events in Morocco and Tunisia are significant on this subject and deeply mark the process of the liberation struggle in North Africa. (note in this area that we have long been the precursors of unity in action, unfortunately never achieved between the three countries).

Today, both parties are resolutely committed to this path, and we, relegated to the rear, we suffer the fate of those who are overwhelmed. This is how our national movement, struck down by years of immobility and routine, badly oriented, deprived of the essential support of popular opinion, overtaken by events, gradually disintegrates to the great satisfaction of colonialism which believes it has won the greatest victory in its struggle against the Algerian vanguard.

THE SITUATION IS SERIOUS !